Edited to add:  I’ve linked up with the Magical Blogorail’s Riding the Rails Blog Hop.

We were lucky enough to visit Walt Disney World and attend Mickey’s Not So Scary Halloween party this year.  Last year didn’t work out for us to attend the party, but we watched the Hallowishes fireworks from our room at the Contemporary.  This year we were ready to head back to the party!  Both boys were determined to party “all night” and make it until midnight.  Corbin’s made it well past midnight in the parks with me before so I knew he’d be able to. As for Carter, I wasn’t too sure…..he likes his sleep.  Here’s a quick (mostly picture) review of this year’s party:
After our drive to Disney, we checked into our resort and quickly changed into our Halloween costumes for the party.  Just a quick monorail ride and we were there! 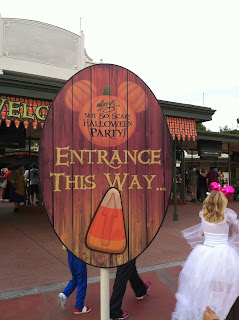 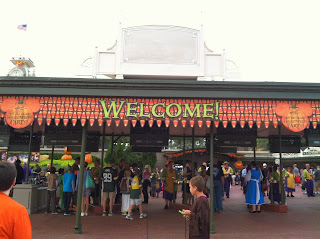 Hubby and the boys wanted to get the special Sorcerers of the Magic Kingdom card from the Halloween party so Hubby and Carter waited in line.

Side note:  that’s a pet peeve of mine about these parties…..you spend so much time waiting in line for the “special” activities that you miss out on so many things.  It’s very disappointing.  I’d love if Disney extended the hours of the party to maybe 1 or 2 to give people more time to get everything in or do Fast Passes for some of the experiences. 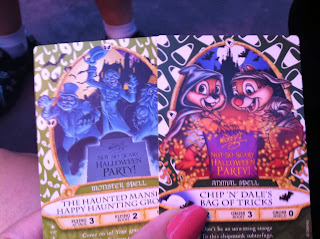 We met up with several friends during the night.  One thing everyone wanted to do was watch the parade.  I really wanted the baby to see it so we had to make the first parade.  Yes I know that’s against all die hard Disney advice but sometimes you have to do what you have to do.  To accommodate for spending prime ride time watching the parade, we also ate quickly while waiting for the parade to start.  That plan worked out well for us and we were able to get great seats for the parade.

Another side note (aka rant):  if people have staked out their parade spot for an hour (or more in some cases!), don’t think you can stroll up at the last minute and push your family to the front.  Most families will let kids go to the front so they can see but it’s so annoying having someone walk up five minutes before the parade starts and stand so close their body’s touching yours to try and get as close as possible to the curb…

Anyways, back to the parade.  I love the Headless Horseman.  He’s still cool but it was so much cooler when he really rode quickly through the parade route. 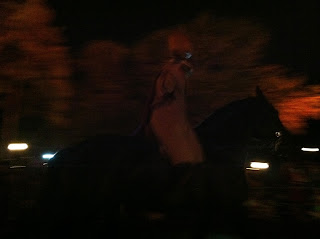 We had a great time watching the parade.  This is one of the family’s favorites for sure!  It hasn’t changed a lot since our last party but that’s not necessarily a bad thing.  The boys were excited to point out things they remembered from past visits and videos. 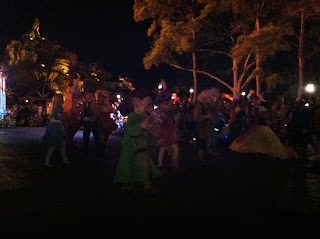 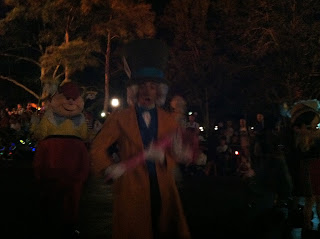 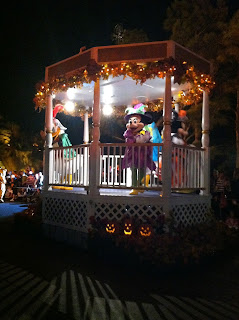 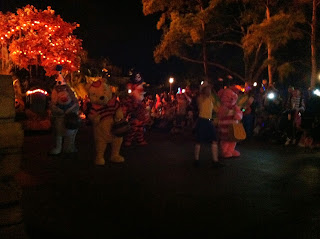 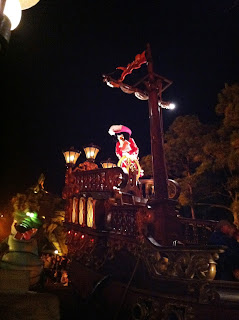 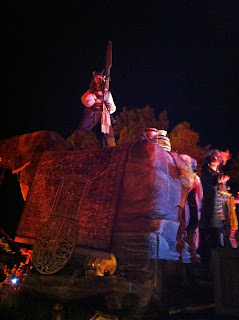 The grave diggers are all three boy’s favorite part of the parade.  Since we were very close to the beginning of the parade route, we got to watch them perform for several minutes before they moved on to the rest of the route. 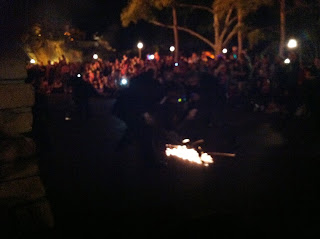 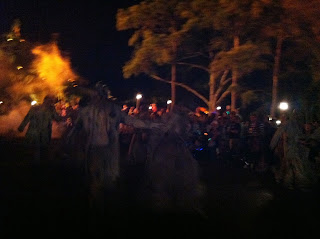 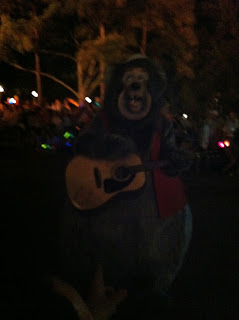 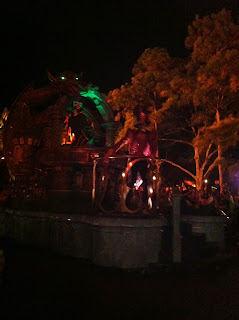 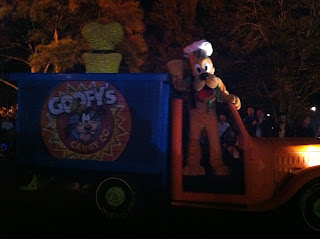 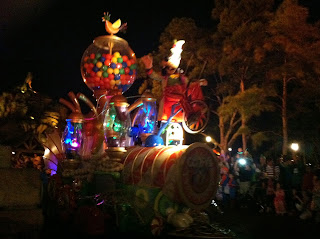 After the parade, the boys really wanted to trick or treat.  That’s what you do at a Halloween party right??  Carolina wasn’t sure what this was all about but she caught on very quickly!  Having been to other Halloween parties at Disney, I really felt like they were much stingier with the candy this year.  Last time we were at the party, the boys went through a handful of lines and had a full bag.  This time they went about 25 times and still didn’t have full bags.  They were bummed about that part… 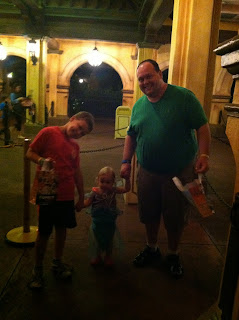 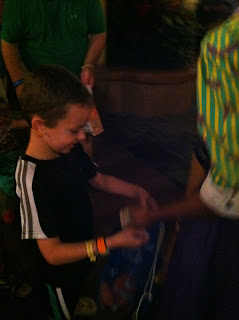 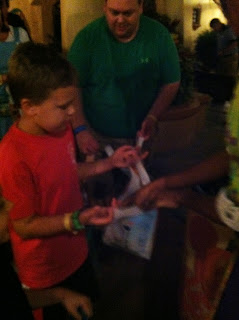 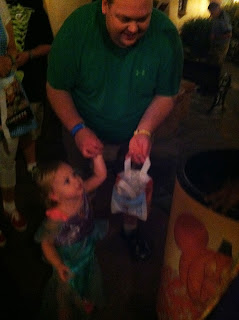 One thing I really wanted to do was watch Hallowishes.  These fireworks are great in the park but truly amazing from outside the park.  Last year we watched them from a fireworks cruise and it was unbelievable.  This is one of my favorite pictures.  So many people stand on Main Street and look at the castle.  By simply turning around, it’s another view all together: 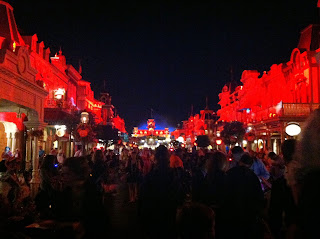 Before long the fireworks started. 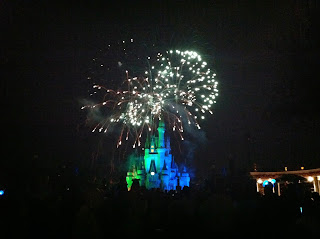 Carolina was completely amazed by it all.  Thankfully she wasn’t afraid of the noise or anything.  She didn’t last too long and fell asleep during the show. 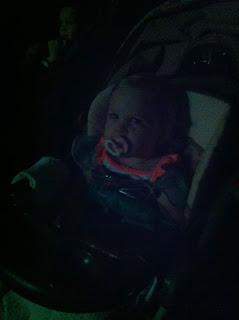 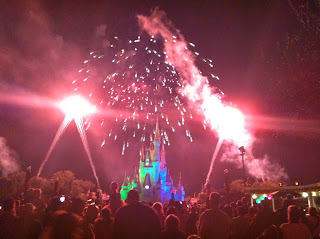 My little bug helped me out and recorded the fireworks show for me.  I had so much fun watching him (and listening as he sang along). 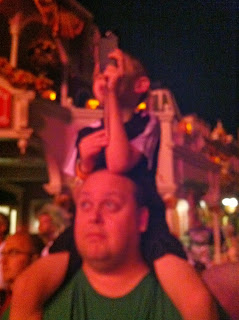 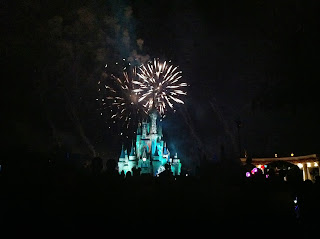 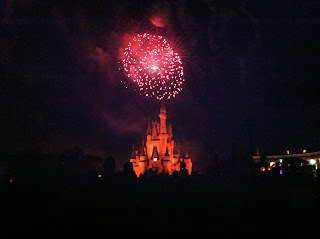 After the fireworks, we parted ways.  Hubby and the sleeping princess headed back to the hotel for more rest.  The boys and I continued on with our night.  They were ready to ride some rides so off we went.  During the party there are always fun characters out that aren’t always out during a normal day at the Magic Kingdom.  We stopped to meet King Louie on our way through.

Time for another rant:  some of these character lines are UNREAL! We arrived for the party about 5:30 and there was already a very long line for Jack Skellington at the front of the park.  I wanted to meet Snow White and the seven dwarfs but the line was never shorter than 45 minutes every time we asked.  Tarzan and Jane were out but that line was crazy too.  I love having the opportunity to meet these “hard to find” characters but it’s not worth the cost of the ticket to meet one character.  This is one of the things I wish Disney would work to improve. 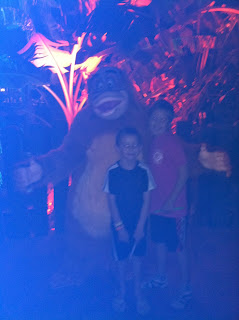 Believe it or not, they both made it until midnight.  They got kicked out of the candy line at 12:03 and we started the trek out of the park and back to the bus to get to our room.  Overall it was a great party and a great way to celebrate Halloween with our family and the friends we met up with throughout the night. 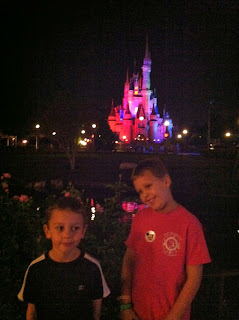 This site uses Akismet to reduce spam. Learn how your comment data is processed.

Lynn is a mom of three amazing children who's just trying to juggle everything while having a good time. When she's not planning a Disney vacation, she's likely at work or volunteering. Read More…